It's often been noted, most recently in the New York Times Magazine (Sunday, December 16, 2012), that the poet Emily Dickinson was more famous in her home town of Amherst, MA for her baking than for her writing, during her own lifetime at least.   That makes sense:  she didn't, apparently, hide pieces of her gingerbread in the attic, sewn together with small stitches, as she did some of her poems.  She baked and gave the product away.  She had, I suppose, much less paranoia about her baking than about her confections made of words.  Who doesn't?

My sisters and I all bake.  It's our heritage, our play, our therapy.  At this time of year, I get a little carried away.  So far, nine different kinds of cookies.  And counting. Cinnamon rolls.  Breads.  During the month of December, I bake instead of write.  And I think that's okay.   The two processes are not so different after all:  the combining of discrete ingredients into something greater than the sum of its parts.  The shaping and then, magically, the rising.  The application of heat.  But at the end of baking you have something that is easy to give away, sweet and paranoia-free.

Happy Christmas to All and to All a Good Night. 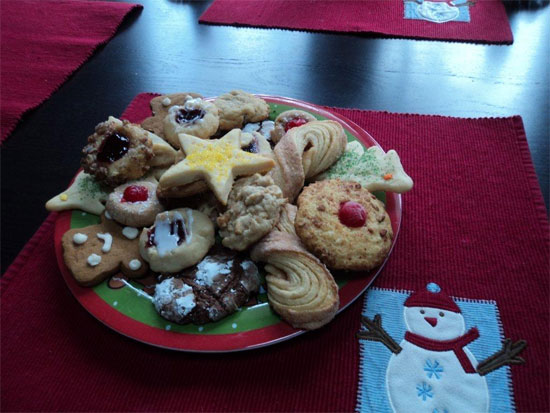 Forgot to say:  that's a plate of cookies created by my sister Libby and me.  Enjoy!